Carol Pucci
Carol Pucci is the former travel writer and Travel Wise columnist at the Seattle Times. She is a contributor to The Seattle Times, JoeSentMe.com, Virtuoso Life magazine and Northwest Travel magazine. 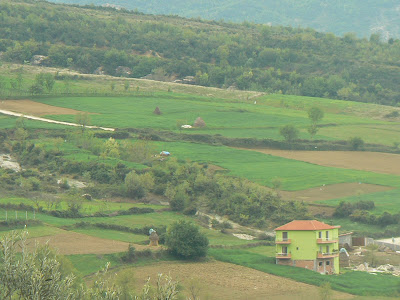 Albania has some stunning mountain scenery, and it doesn't take long to get out of the city to see it. The scene above is right outside Tirana. It's the village of Pellumbus, and it's where we started a walk to a prehistoric cave, called the Black Cave, with an organization called Outdoor Albania.

As is often the case with these sorts of outings, getting there and back was almost more fun than visiting the caves themselves, mostly muddy and dark, with some small stalagmites. Not the Oregon Caves or Mammoth Caves, but interesting maybe for no other reason than they are not more than a half an hour's drive from Presidenti George Bush Street (That's right. Keep reading) in downtown Tirana.
Our guide was the 60-year-old father of the owner of the company. When he was younger, he said getting here involved a two-day trek. Now it's a  half-hour of driving time, and about 1.5 hours to walk two miles along a rocky, up and down path cleared along a cliff high above a river. We felt lucky to be wearing hiking shoes, so we were pretty surprised to see a group of Albanian college students descending, many of them wearing sneakers, and a few in heels! The cave floor was coated with a layer of glue-like mud. Maybe they didn't go in very far. Probably not because none of them brought flash lights. They used their cell phones for light! 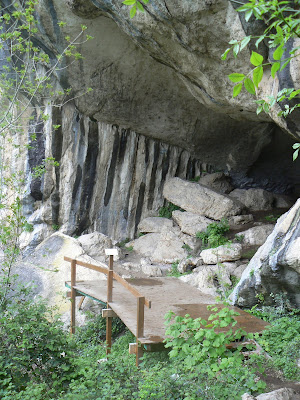 Their lack of seriousness didn't impress our guide, Ilir Mati, a life-long mountain guide who worked on submarines during the communist years. All the while Albania was closed to the outside, he said he dreamed that someday people other than Albanians would get to experience his country's natural surroundings. Now his son, Genti, who owns Outdoor Albania with his Dutch wife, is making that dream come true. 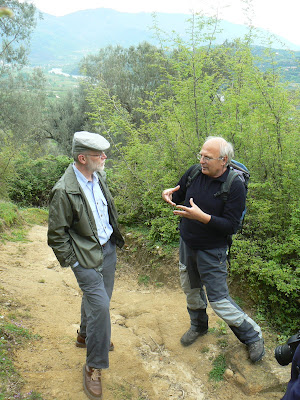 Tom and our guide, Ilir Mati
Tom and Ilir discovered they share the same birthday, almost. Both are 60 and were born in 1949, one day apart. But as Tom points out, maybe it was the same day, with the six-hour time difference between Cincinnati and Albania. We  had a good time talking to Ilir about President Bush's visit to Albania. The Albanians liked him so much, they named a street after him. Or at least the government did. It's debatable as to if the general public was as enthusiastic as the officials who staged a big welcome in a nearby military town, Fushe- Kruja. It was there, according to which story you believe, where Bush either lost his watch or someone lifted it as he was riding along in a motorcade. 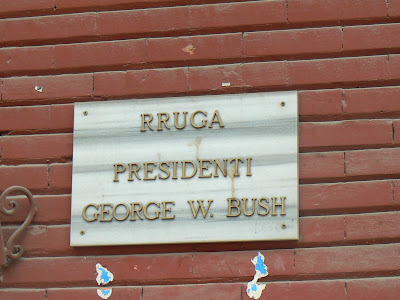 
On the way to dinner tonight with an Albanian college professor and former journalist, we spotted an  "We love you Mr. Obama''' sign.

"Albanians love Americans and America,'' she explained. "They don't care who 'he' is."