Carol Pucci
Carol Pucci is the former travel writer and Travel Wise columnist at the Seattle Times. She is a contributor to The Seattle Times, JoeSentMe.com, Virtuoso Life magazine and Northwest Travel magazine.

Finding the Puccis in Greci 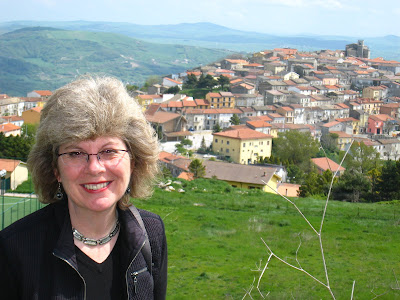 
Sorry to to be late in posting this update on our visit to Greci, the Arbereshe (Albanian) town in Southern Italy where my grandfather was born. We were without Internet access for the four days while in Naples, then waylaid on our way back to the U.S. by flight delays. We were forced to spend the night in New York on Sunday, but all is clear now, and I'm writing this from the airplane on the way back to Seattle...finally! 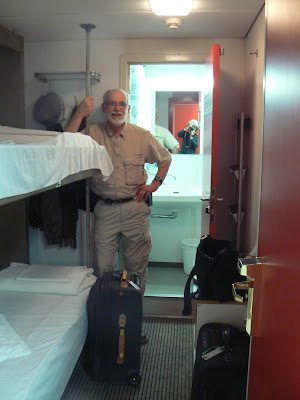 
The overnight ferry from Durres, Albania to Bari in Italy was surprisingly comfortable. The ship was an old Latvian cruise ship converted into a passenger ferry. Our little room had two bunk beds, a shower, toilet and sink. We got a good night's sleep, and arrived in Bari around 7:30 a.m. One glitch: We left Albania with some extra Lek, thinking we could buy coffee or breakfast on the ship, but no luck. The ferry is owned by an Italian company, and the coffee shop accepted only euros. We did a little "black market'' exchange with an Albanian man who offered us some of his euros in exchange for our Lek. The rate was in his favor, or course, but that was fine by us since Albanian currency is pretty much useless outside the country.


Greci is a small hill town between Naples and Bari in Italy's Campania region. "As you're driving in, you're driving on what used to be a shepherd's trail,'' I remembered someone telling me. The road is paved, but it still takes about a half-hour of steep driving, winding through the hills to reach it from Ariano Irpino, the closest big town where we got a room for the night ($60 with breakfast) at the Hotel Villa Sorriso. No English was spoken, but that was OK. Our Italian is improving.


We spent part of that day and the next morning walking around Greci exploring the Pucci "roots.'' My grandfather, Nicolas Pucci, was born here in 1901. His father, Leonardo, my great-grandfather, came to the United States as a young man in the early 1900s. His mother, my great-grandmother, Angiolina Panella, followed a few months later with my grandfather who was about two at the time.  They settled in Canton, Ohio. The town offered good job opportunities in construction and in the brick factories. Many people still living there have family ties to Greci. 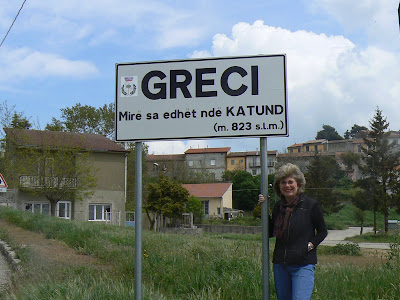 There are dozens of small towns like this scattered on the hillsides of Southern Italy, but  Greci stands out because it's one of 51 towns in Italy settled by Albanians between the 15th and 18th centuries. The communities call themselves "Arbereshe,'' and the people in these towns speak Albanian as well as Italian.

"Katund'' is the Albanian word for village. The Pucci and Panella families and most others here are ancestors of Albanian soldiers who settled in Greci sometime in the mid-1400s. The King of Naples invited them to relocate after the Albanian military leader, Skanderbeg, answered a call to help the Italians defeat French-supported insurrections. Greci was originally settled by Greeks, then abandoned. The Albanian soldiers, seeking to escaping the Ottoman invasion of Albania,   favored Greci because it was the highest town in the area and presumed safe. The Puccis were one of 13 original families from Albania to settle in Greci.

As far as I can remember, my grandfather mentioned "Greci'' only once, when years ago I asked him where he was born. He seemed unsure,and was vague about any details, but mentioned something about an Albanian connection. For a while, we thought his parents -  my great grandparents- were born in Albania. He told my father and my two aunts nothing about his family's roots in Italy, and it was only a few months ago that we confirmed our family connection to Greci.

I ran across a web site called www.grecicounsins.com put together by John Mazzarella, 64, formerly of Canton, now living in Miami. He and a friend spent several years doing genealogy research, unearthing birth certificates, marriage and death records in Greci and Mormon Church archives. They have organized reunions of Greci cousins living in the U.S. and Italy, and have connected people all over the U.S. who share a Greci connection. Using the information I gave him on by grandfather's name and birth date, he came up with a copy of his birth certificate, records from Ellis Island and drew up a tree tracing our family back 12 generations.

Pucci, I found out, is a common Albanian name, but in Albania, it's pronounced with an "s'' instead of a "ch'' sound. My father never learned Italian at home, but this is the first time I heard an explanation as to why:

"It's likely your great-grandparents spoke only Albanian,'' said Rita Perillo, 63. Rita and her husband, Pino, spent the afternoon and the next morning showing Tom and me around town.

Rita was born in Greci, but grew up in Australia where her father, a shoemaker, moved the family to find work. The people in Greci, mainly farmers and shepherds, had little money. They bartered for most things which meant Rita's father couldn't muster the cash he needed to buy leather. Rita came back to Greci for a visit when she was 19, and met and later married her husband, Pino. They lived in Australia for a while, but eventually returned to Greci.  Because they both speak English, they often greet visitors from the United States. Below is Rita holding a tile she decorated with memorabilia from a trip she and Pino took to the U.S. for a reunion of Greci cousins in Canton. 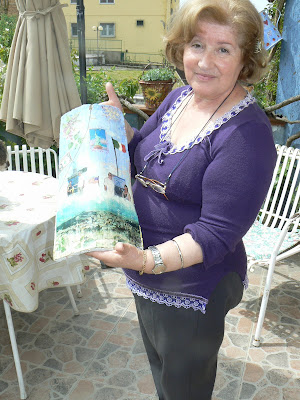 
Rita seemed sad when she talked about a time when Greci was a lively town with a cinema, shops, schools etc. Nearly 4000 people lived in Greci in the 1950s. Now there are only about 800, most of them retired. As with other small towns in Southern Italy, young people leave to find work. There are just two bar/cafes, a couple of small grocery stores, a Catholic church with one priest and a doctor who makes house calls. The bakery closed recently, and there are only about 25-30 children in elementary and middle school. 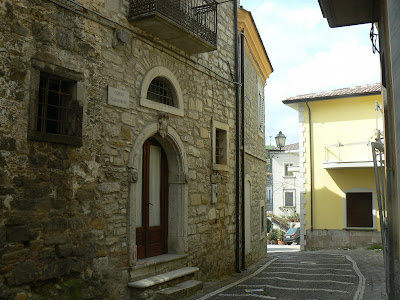 Greci has some historic 17th century stone houses, but about 80 percent of the buildings are new, built after earthquakes in 1962 and 1980. 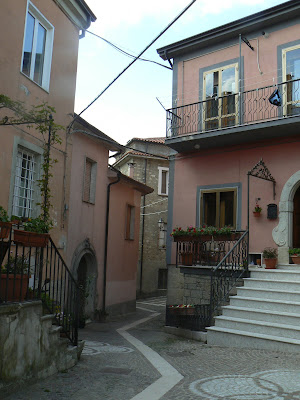 As you can see from the pictures, Greci is a well-kept town, with new stone streets and homes with freshly-painted exteriors. The current mayor apparently has some pull in attracting government money. Money also comes from people from Naples who have been buying up houses for weekend and summer retreats. 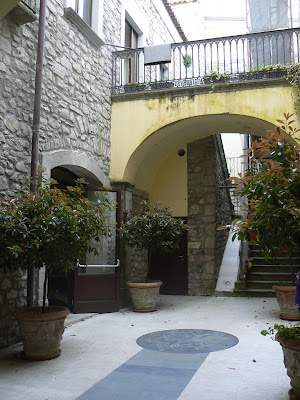 
Above is the town hall in a 16th century palazzo once owned by a wealthy landowner named Lusi. Many people, perhaps even my grandfather's ancestors, were Lusi sharecroppers. This picture of Skanderbeg hangs in the town hall. There's also a small museum housing some 7th century BC artifacts unearthed during excavation for a soccer field. 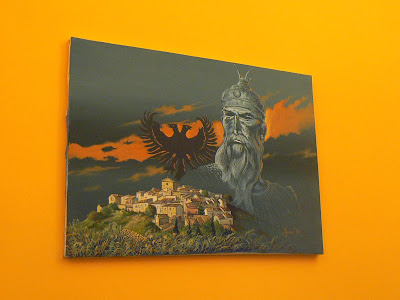 
We ran into many people with the last name of Pucci while we walked around town with Rita and Pino. Below is Glelia Pucci. She runs the Bar de Corso, a 100-year-old cafe started by her grandfather. Are we related? This turned out to be a  complicated question. 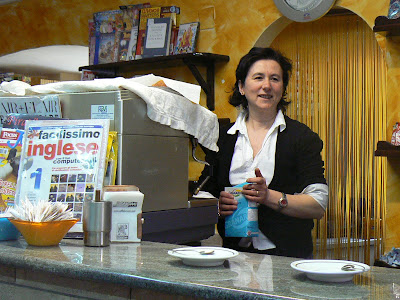 
Pucci is a common name in Greci, so common, in fact, that the only way to really know to whom you might be directly related is to know your family's "nickname,'' a name that was passed down through the generations. With so many people all sharing the same last names, families adopted nicknames to tell each other apart. Often the names humorously referred to some physical characteristic such as Nicola "Big Ears''  Pucci. That's just an example. I really have no idea what our family nickname was.  But it didn't really matter. Because Greci was so isolated, almost everyone married within the town. "We're like a big family,'' said Rita. "We're all related in some way.'' 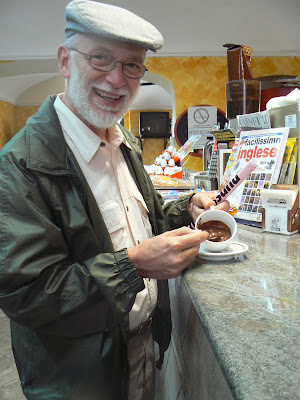 Tom found the best hot chocolate in Italy at the Bar de Corso. When made correctly, it's thick enough to eat with a spoon! 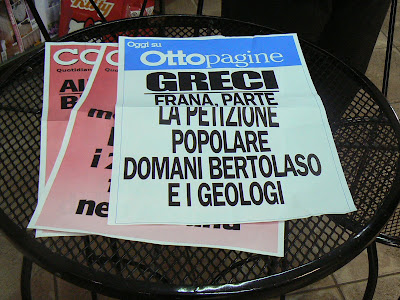 I liked the Bar de Corso because it sold the Greci newspaper. 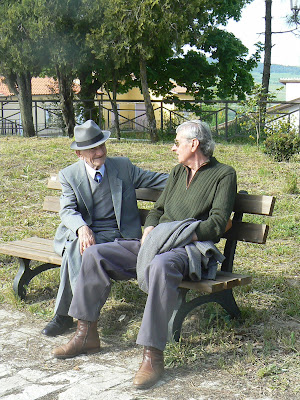 
Everyone was extremely friendly. Greci overlooks a lush valley, and people keep fit waking up and down the hills. Many older people we met volunteered their ages. Above is Pino Perillo, right, with Leonardo Meola, 95. Leonardo was a tailor, and made the very natty suit he was wearing. 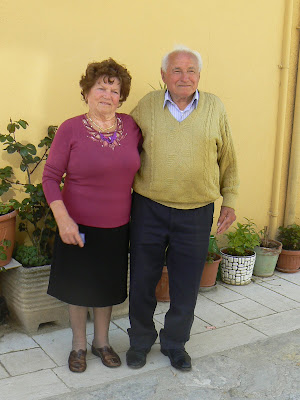 
This is Rita Martino and Nicola Pucci. Rita hugged and kissed me when she found out my name was Pucci. Like nearly everyone else we met, she has relatives living in the U.S. In her case, it's a  brother in New York. 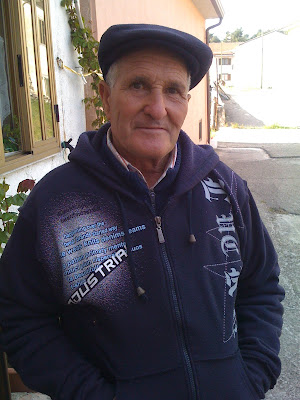 This is another Nicola Pucci. My father and Nicola are fourth cousins, according to John Mazzarella's genealogy research. 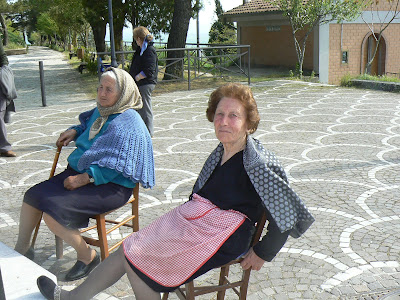 Rosaria Cornacchia, left, is 91. She and her friend, Raffaella Mazzarella, were sitting on dining room chairs watching Rafaella's house being painted on a sunny afternoon.


We explored the cemetery to look for markers or pictures of people with the Pucci or Panella name. Most of the headstones were recent. Chances of finding the graves of anyone who died several generations ago were slim since it's common to dig up older graves to make room for new ones. 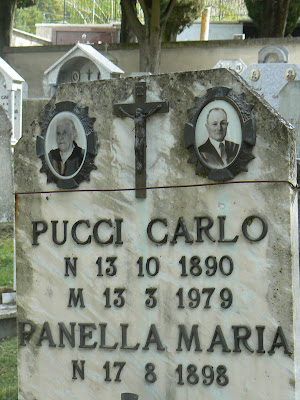 When someone e-mails, apologizing for not getting back to you sooner because they've been busy killing pigs, you know you're going to eat well at their house.


One of the highlights of our visit was dinner with Maria Castielli and her husband, Dante, who live in Ariano Irpino. Maria's mother was born in Greci. Maria lived for a while in England, and she and Dante worked in Canada before returning to Italy in the 1990s to raise their family. They have a house and a small farm with animals, vineyards, fig trees, olive trees and a huge vegetable garden. 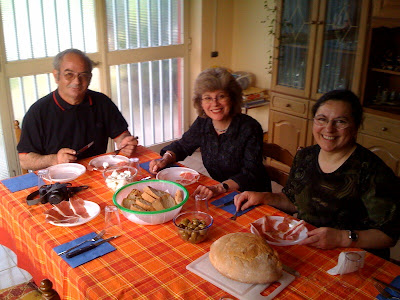 Maria and Dante fixed what was probably one of the best meals we've ever had in Italy. There was home-made prosciutto (from their pigs), fresh mozzarella, olives, pasta with a ragu sauce, a big loaf of homemade bread, chicken with lemons plucked from a tree in their yard and wild asparagus picked at 4 a.m. by Dante before he goes to work.  We drank Dante's homemade wine, and spent the evening eating and talking about politics and the economy as if we were old friends.

How lucky we were to make it to Greci after years of wondering about the Pucci family's roots in Italy.  We'll no doubt get back there for more exploring. Southern Italy is becoming one our favorite parts of Italy. The people are friendly. The food is good. Prices are low, and so far it's mostly undiscovered by tourists. We'll be back soon, just as soon as we pin down that Pucci nickname.

For more pictures of what we saw and experienced in Albania and Greci, click here.

Also, here's an update and some photos from the U.S. Greci Cousins Family reunion held in Canton, Ohio on August 25, to celebrate the feast day of St. Bartolomeo, the patron saint of Greci. Congratulations to all the Canton, Ohio organizers who did a fantastic job of pulling together people, food, music, memorabilia for a memorable afternoon of socializing and evening dinners at Tozzi's restaurant in Canton. 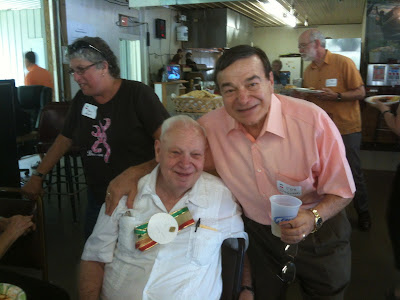 This is former U.S. Congressman Joe DeoGuardi and the reunion organizer Bob Petersen. 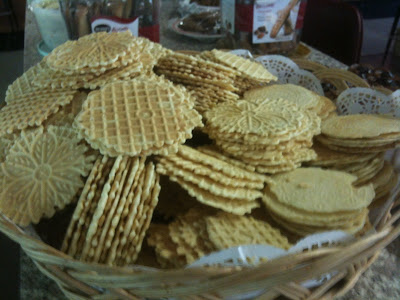 These need no explanation. There were hundreds and hundreds! 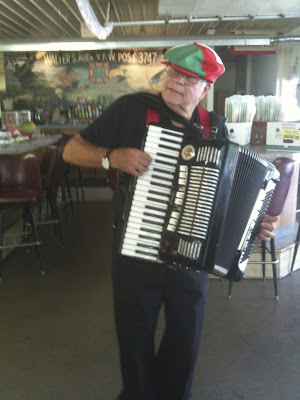 There were speeches, lots of eating, and of course, music. 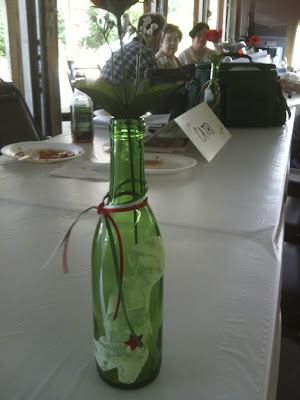 For anyone unsure of exactly where in Greci is, the organizers came up with these table decorations pinpointing the location of Greci with a star on a map of Italy.